Imagine yourself a scientist living in 1905s, and some dude with messy hair reached out to you. He told you that “E = mc^2” and mass is just another form of energy, and when you asked him for a proof, instead of giving you one, he told you that he just dreamt about it.

Now, you are thinking of two ways to deal with him, the first one is that “this man is crazy.”

The second way, you sit down and try to find an explanation for what he’s saying.

Of course, we know that this didn’t happen, but there’s a very specific definition of what happened, and that is “black box,” which is simply when you get a specific result and you are unable to explain it. Your process of getting it is a black box.

Since humans have been researching and experimenting for thousands of years, they have developed a way to prove and explain things, that’s why you may never find many black boxes in modern science, but on the other hand this isn’t true for machines, machines that can learn by themselves!

So you may be thinking what does the black box paradox have to do with machines, but I am not talking about ordinary machines; I am talking about deep neural networks machines.

To understand this well, I am going to take you on a ride in the world of neural networks and how it works.

To think of how neural networks work, you can say it’s roughly similar to how your brain works. Neural machines consist of nodes (we can call them neurons,) think of these neurons as variables or a placeholder that holds a value from 0 to 1.

These neurons are organised as layers where they are connected to each other by links, each neuron is connected to other neurons that are in the layer before it, each neuron triggers or gives a high value between 0 and 1 if they capture a feature they desire. Whenever the layers increase, you find the neurons detect a much more complex feature until it reaches the output layer, where it decides if this input holds the value we want.

The real difference between these networks and our brains is that they are trained backwards! When they get a wrong answer, you give them the right values from the output and everytime neurons adjust the links between themselves slightly to get the right answer next time.

They do this automatically. Don’t worry this is done using Algebra not magic. All you have to do is repeat this a million times and in the end you get a network that can identify a cat from a thousand dogs. 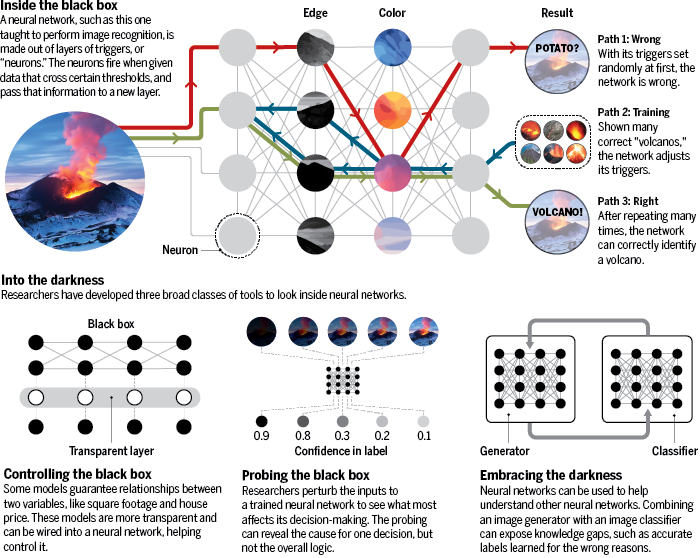 This is an image that can help you understand how neural networks work.

What is the problem?

“It can get the right analysis  for the wrong reasons ”

So what does the black box have to do with all this? The simplest answer for this is that the layers between the input and output are just hidden layers. You can’t look at them and understand what they are. They are just a bunch of neurons that are connected in a certain way. They are not code. And this, ladies and gentlemen, is the black box.

You may wonder: “if it is working, then what is the problem?”

The answer is that it is not a problem if you just want to identify cats from pictures, but if you want your neural network to solve life and death problems then that’s a huge problem.

If your network is going to drive your car, or your doctors will use it to diagnose someone with cancer, or be responsible to tell you if North Korea will start a world war. Then, you need to understand how it gets these results because you need to explain to the decision maker why the network gives you that analysis.

Just like neurosurgeons using tools to look into the brain of a human, researchers have developed tools to explore the brain of the AI, and then classified it into three classes:

Here’s an example of a couple of tools and methods used:

One approach suggested by Marco Ribeiro, is to use tools known as “counterfactual probes.” These probes keep altering the inputs in a way to reveal which inputs influence the final output or decision making. The problem with this method is that AI needs to be tested thousands of times over and over. That is when Sundararajan and his team thought of a more effective way, introduce a blank reference (black image or an array of zeros) and keep adding inputs to transition it or the example being tested, instead of changing the inputs randomly.

Ironically enough, another way of glassing out the black box of the AI, is by using AI.

We’ve seen numerous sci-fi movies about “Robots taking over,” and we think of it just like we do with Zombies Apocalypse movie tropes. It is just fiction, right?

Now look back at how we’ve reached a point, where we are unable to explain how the work of our own hands works, taking in consideration the incident of Two AIs communicating with each other with a language they invented that humans couldn’t understand. What do you think of it now?

Maybe these movie tropes that we’ve always watched for entertainment are actually predictions of the future we’re pushing ourselves towards.

“This is a good start for my plan to dominate the human race.” -Sophia the robot

IEEE Cairo University Student Branch was the first IEEE student branch to be established in Egypt. It's a society that connects local Engineering students with different professional on field . We provide them with both technical and soft skills events and workshops for their career development.